The long-awaited pilgrimage to Jerusalem, postponed from 2020, took place August 1-15, 2022. With the blessing of His Beatitude Archbishop Nourhan Manougian, the Armenian Patriarch of Jerusalem, ten altar servers from both the Eastern and Western Dioceses gathered at St. Nersess Armenian Seminary for the journey of a lifetime. Fr. Mardiros Chevian, dean, selected and led the group of deacons and sub-deacons to study the most integral week of the Armenian liturgical calendar, Avak Shapat, at the seminary of the Armenian Patriarchate of Jerusalem.

Their journey began with overnight orientation at St. Nersess, including daily worship services; an overview of Holy Thursday and Good Friday services by Dn. Alex Calikyan, a 2019 graduate; an explanation of entry procedures into Israel by Fr. Mardiros; and a viewing of the film From Ararat to Zion. The participants spent time getting to know each another and preparing for their journey before departing from JFK airport on August 1. When they arrived in Tel Aviv the following day, Fr. Mardiros and the ten pilgrims made their way to the Armenian Patriarchate in Jerusalem where they lodged for the entire two weeks at the seminary.

On their first full day and every morning during their trip, the group attended Jhamerkootiun at 7:00am and experienced the awe and splendor of Sts. James Cathedral with its beautiful icons and hundreds of oil lanterns suspended from the ceiling. After a tour of the Armenian Patriarchate, the group was received at the residence of the Patriarch, Archbishop Nourhan Manougian, who spent time answering questions and explaining the importance of Armenians making pilgrimage to the Holy Land of Jerusalem. Der Mardiros and the group expressed how happy they were to be in Jerusalem.

As part of the daily itinerary, the group received instruction from Hayr Kevork Hayrabedian each morning to learn the sharagans of Avak Heengshapti and Avak Oorpaht (Holy Thursday and Friday) – the two days of Avak Shapat they concentrated on learning.

During the first week of excursions, the group first toured the newly renovated Mardigian Museum, which will house even more artifacts upon its completion; the Gulbenkian Library where they were allowed to view two 10th century manuscripts; and met the academic director of the Sts. Tarkmanchatz School, currently under renovation, and learned about the important role the school plays in educating the Armenian youth in the Armenian Quarter of Jerusalem. The group had the opportunity to play on multiple occasions during their stay, friendly soccer and volleyball matches with the local youth, creating new friendships and bonds.

Many afternoons, the pilgrims were present for the 3:00pm Jhamerkootiun at Sts. James Cathedral. On one day, they toured the Soorp Purgich Convent where over the years, many Patriarchs have been entombed, the most notable of whom for the group were Archbishop Tiran Nersoyan and Archbishop Torkom Manoogian. They gathered around their tombs and performed a Hokehankisd service.

They traveled through the Zion Gate of the old city of Jerusalem and visited and prayed in the “Upper Room” where Jesus and the Apostles had “The Last Supper” and where Jesus washed the feet of the Apostles. There they sang Sharagans and had a bible study.

Also, they visited the Garden of Gethsemane and Church of St. Mary’s Tomb, as well as the Armenian section of the Garden of Gethsemane where they conducted bible study. They also toured the Christian Quarter and the “Stations of the Cross,” concluding at the Church of the Holy Sepulchre, where they saw the Armenian, Catholic and Greek sections and participated in the Armenian Tapor. It was a humbling experience, as they were flanked by pilgrims from all denominations.

On the weekend of August 6 and 7, the group traveled to the Church of the Beatitudes, where Jesus preached the Sermon on the Mount. They took a boat ride on the Sea of Galilee, where Der Mardiros instructed the captain to stop the boat, cut the engines, and drift in the middle of the Sea. Fr. Mardiros read the Bible passage about Jesus’ miracle, “The Calming of the Storm,” after which the boat returned to shore.

For Sunday Badarak, they crossed the border to Palestine and visited the Church of the Nativity in Bethlehem. Prior to touring the multiple Armenian altars and underground excavation that is believed to be the place where the Bible was first translated into Latin, the group participated in the Badarak, on the actual site of Christ’s birth. Two participants – Dn. Garen Megrdichian and Michael Connors – served as Kushotsagirs.

The following week, the group traveled to churches in Nazareth, Cana, Ein Kerem, and Jaffa, with a short stop to experience the warm waters of the Mediterranean Sea. A highlight was experiencing the River Jordan, the baptismal site of Christ by John the Baptist. Dn. Mark Krikorian and Dn. Greg Zohrabian were chosen to be Godfathers for the Choororhnek Service based on their birthdays being closest to the day of the visit to the baptismal site. All the participants put their feet into the sacred waters. They then moved on to the Mount of Temptations, where Jesus spent 40 days and nights overcoming the temptation of Satan, and to Jericho, which is the oldest known city in the world. A leisurely afternoon at the Dead Sea was enjoyed by all.

On August 14, they awoke early to prepare for a 4:00am Badarak at the Church of the Holy Sepulchre. The beauty of the Sepulchre in the early morning light was absolutely stunning. The group wore shabigs and sang the choir parts that filled the Cathedral with their beautiful voices. Dn. Greg Zohrabian and Karo Boyadzhyan served as Kushotsagirs, and Dn. Greg Kazanjian as Poorvaragir. Having the opportunity to celebrate the Holy Badarak at such a revered and historic site was an incredible experience for all. Later that morning, they attended Badarak at Sts James Cathedral, which was presided by Archbishop Nourhan Manougian who at the conclusion, blessed grapes. The bold and the brave met at Razouk’s Tattoo shop to memorialize the pilgrimage with a traditional haji.

Before departing for the airport, time was spent with the Patriarch to thank him again and bid their farewells. Karo Boyadzhyan and Jack Hamparian spoke beautifully on behalf of the group in both Armenian and English.

All ten participants, under the leadership of Der Mardiros, had the experience of a lifetime, as they shared their faith, heritage, and emotions, with a common thread – their love for the Armenian Church. They are grateful to His Beatitude Archbishop Nourhan Manougian and the Sts. James Brotherhood for their generosity, kindness and hospitality. The program was generously funded by the following donors: Mr. and Mrs. Edward Mardigian, Mr. David and Dr. Myrna Onanian, Mr. and Mrs. Gregory and Meline Toufayan, and Dale Chakarian Turza. To read the reflections from each participant, click here. 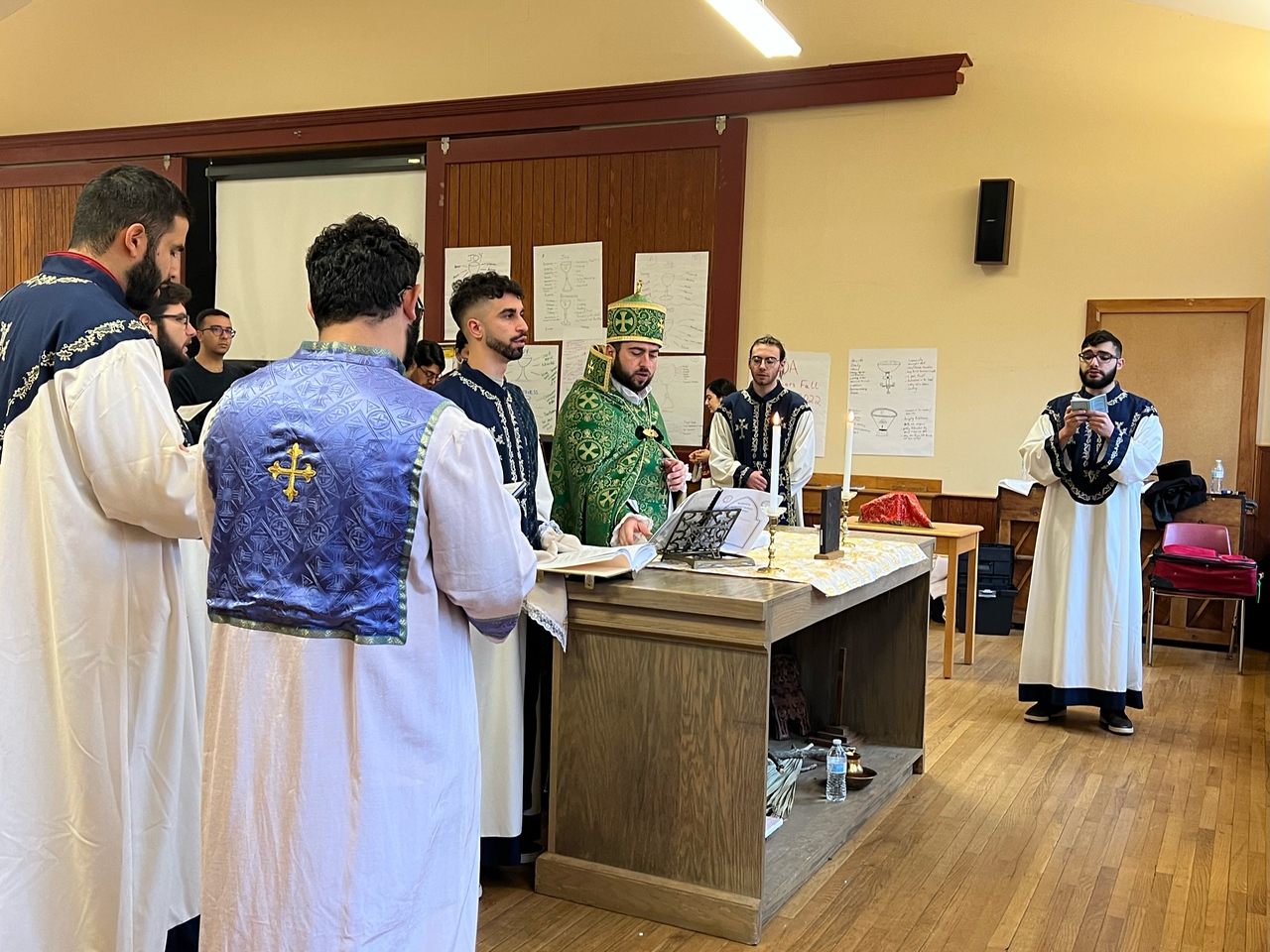