“St. Nersess Armenian Seminary has a vital role and mission to realize in the life of the faithful communities of the Armenian Church of North America, namely to proclaim the Word of God to the hearts and minds of the faithful who strive to live the life of Christ in their spirituality and relive the Christian Faith as conveyed to us through the vision and wisdom of the Church fathers and the children of the Armenian Church.

St. Nersess calls on us all to be a partner in the Holy Work of God in support of a sacred mission: Training new pastors of the Church. Investing in the sacred mission of St. Nersess is equal to becoming an apostle of Christ and an ambassador of the Armenian Apostolic Church.”

Fr. Mardiros also met with the Western Diocesan Council during its regularly scheduled meeting as well as with Armenian clergy in local parishes. He visited four Armenian Day Schools – Arshag Dikranian School, the St. Gregory Hovsepian School, the AGBU Vache and Tamar Manoukian School, and the AGBU Manoogian-Demirdjian School – where he had an opportunity to discuss the seminary and religious vocations with the school principals and the students in the upper grades. Fr. Chevian presented St. Nersess Armenian Seminary during a talk to the Men’s Monthly Forum at St. Gregory Armenian School in Pasadena, as well as to the children of the St. Ghevontyants Saturday School of St. Leon Armenian Cathedral.

At the conclusion of his trip, Fr. Mardiros celebrated the Divine Liturgy on Sunday, January 20th and gave the sermon at St. Leon Armenian Cathedral preaching on “The Call to Ministry in the Armenian Church”. Following Divine Liturgy, he was the main speaker at the Annual Stewardship Luncheon held at Nazareth and Sima Kalaydjian Hall in the Diocesan complex.

A well-organized visit, Fr. Mardiros enjoyed warm hospitality and received clear support from the Primate, clergy, and lay leaders, who are ready to embrace St. Nersess and its expanded mission. In October 2013, at the invitation of Archbishop Hovnan, Fr. Mardiros will return to the Western Diocese to participate in an annual clergy gathering to further discuss vocations and support for the seminary.

With the Diocesan Council of the Western Diocese and Abp. Hovnan Derderian.

At a banquet honoring retired clergy of the Western Diocese to benefit its stewardship program. 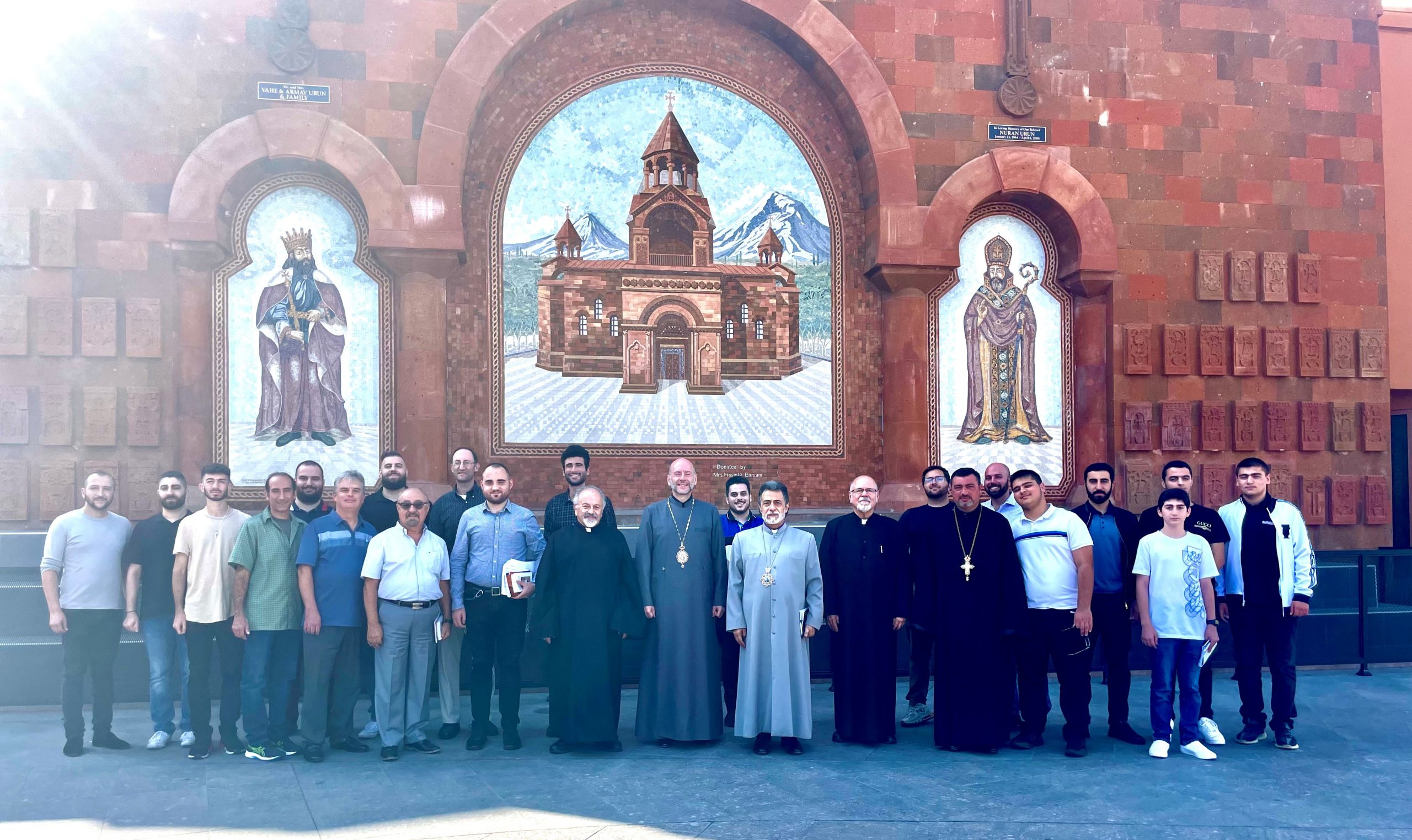